Stargazing will always be an unforgettable experience with the Celestron 21045 114mm Equatorial Powerseeker Newtonian telescope. Whether you’re an amateur astronomer or a professional, you’ll equally enjoy this eyepiece which provides everything a customer needs from a telescope: power, range, and design.

Although most view Newtonian eyepieces as being bulky, this telescope manages to balance both power and size. Furthermore, thanks to its fully coated optics for optimal image transmission and clarity, all images will be crystal clear.

The Celestron 21045 is a Newtonian telescope, meaning that it uses reflection in order to create a coherent image. Unlike refractive telescopes which basically collects and focuses the light, Newtonian pieces send the light directly to the eyepiece situated at the top of the telescope, after it bounces off two mirrors.

One major difference between the Celestron 21045 and a regular refractor telescope is that the images produced in eyepiece are cleared and crisper. Furthermore, thanks to its construction, Newtonian telescopes like the Celestron 21045 eliminate the chromatic aberration issues.

The Celestron 21045 employs German equatorial mount, which offers improved control over the telescope’s body. With this type of mount, the users will not require additional levers or clutches in order to control pitch or azimuth. 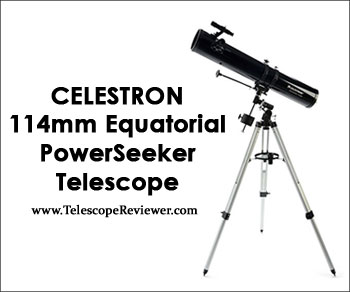 Moreover, this Newtonian telescope sport out a coated, dual-mode lens, which works like a charm for both terrestrial and celestial observations.

Thanks to its 114mm aperture, you’ll be able to see even the smallest details of celestial objects. Speaking of which, while a refractor telescope is more suitable for tracking the Moon or Saturn’s rings, a Newtonian telescope like the Celestron 21045 is more attuned towards tracking fast-moving space object like asteroids and comets.

You can also use this telescope in order to observe dim stars and whole constellations, thanks to its two eyepieces that sport out a combined zoom of 270x. As far as the lens are concerned, the Celestron 21045 has a three Barlow lenses with a high magnification factor. 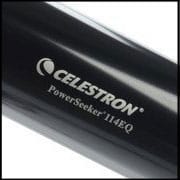 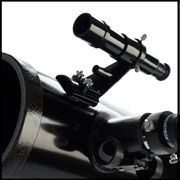 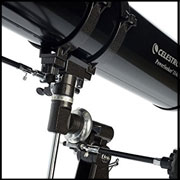 Upon purchasing your very own Celestron 21045 114 mm Equatorial Powerseeker telescope, here’s what you will find in the box:

Additional Accessories for the Celestron 21045 Telescope: 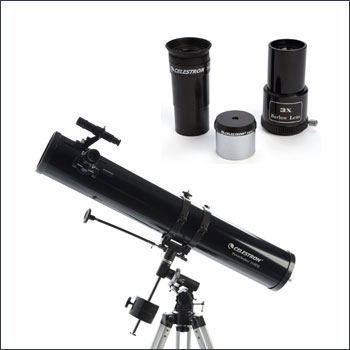 According to Amazon’s review section, the Celestron 21045 has a 4 out of 5-star rating, and most users comment that the product is a very good choice for a beginner. However, recently, some of the customers talked about how difficult it is to assemble or to collimate the telescope.

As far as power and precision go, one of the customers commented that the images produced via the high-quality eyepieces are vivid, but the product loses part of its shine when used to track fast-moving objects or make an observation on distant objects.

Moreover, other customers have complained about the telescope’s weight and size, by saying that it’s a little too big and bulky to be carried around in the trunk of a car.

All in all, the customers find the Celestron 21045 reliable and they are even willing to recommend this product to friend or family.

Where to Get it

As always, Amazon.com is a good start in if you’re interested in buying this telescope. Although Newtonian telescopes are quite expensive, you can order this telescope for only 118 dollars. Furthermore, in order to make the offer even more appealing, Amazon.com even throws in a free shipping fee offer.

Other places where you can purchase the Celestron 21045:

Compared to a reflective telescope, we can clearly state that a Newtonian telescope is far more powerful in many aspects. Although the Celestron 21045 was and is a telescope for beginners, it’s still a trustworthy piece of equipment.

At first, users will have trouble understanding how it works, but the manual will answer most of your questions. As far as the collimation process goes, all users have complained that it takes a fair amount of time in order to get the eyepiece up and running.

If you don’t want to waste any time setting up your telescope, you can always order an extra collimation tool that makes the process much easier. Moreover, if you’re set on buying this telescope, we strongly suggest you to buy a metal finder and focuser, because the original pieces are made from plastic.

The Celestron 21045 might be a sturdy piece of equipment, but we strongly advise using it under adverse weather conditions. Reflective telescopes are sealed at both ends, thus ensuring that the mirror assembly remains intact. However, Newtonian telescopes like the Celestron 21045 are not sealed at both ends, which means that it doesn’t fare so well against humidity and UV radiation.

So, we can state that the Celestron 21045 is a decent piece of equipment, with a good price/quality ratio. For additional hints on stargazing, you can always order extra star charts and astronomy manuals from either the telescope’s official website or from Amazon.com.