The Celestron 22065 Astro Master 102AZ is a telescope designed for those interested in nature and need to watch planetary and other heavenly bodies. The 22065 102AZ is one of the scopes in the Astro Master series. Telescopes in this series offer high-quality images of land and sky objects. Like other scopes, the Celestron 22065 Astro Master 102AZ comes with a stylish design and offers great performance when focused right. The quality of images mirror what you would expect with some professional telescopes.

Beginner astronomers and hobbyists will find this telescope useful especially given that it has minimal, but high-quality features. Being a 4-inch refractor telescope, the unit can be used for deep sky astronomy. True to its name, the telescope has a 102mm aperture, which allows you lots of surface details, rings, and craters.

It is offered with two eyepieces with different focal lengths, offering you adjustability. This text assesses its features and performance.

The Celestron 22065 Astro Master 102AZ is a refractor telescope designed to offer professional quality images whether you are viewing land or sky objects. It is offered with a simple user interface and quick setup, making it an appealing choice for beginners.

You are offered a tripod for comfortable viewing. The tripod is high quality, enhancing its durability. While you cannot discover new planets with this telescope, you can study the existing planets in depth. 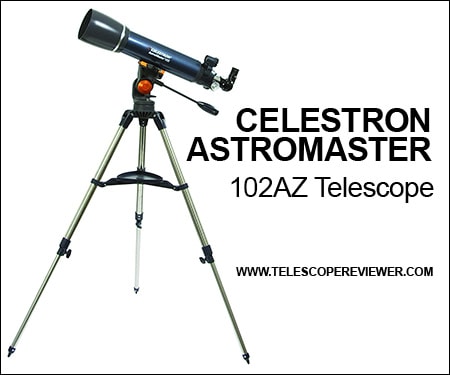 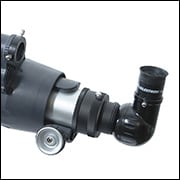 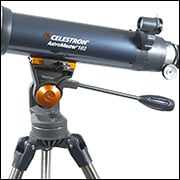 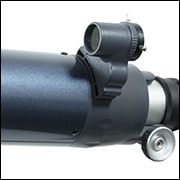 Those observing galaxies and stars will have a clear view, and so are those watching birds and wildlife. A computer software accompanies the telescope, so, you can integrate the telescope with your computer for record keeping, planning, and photography. The software allows you to see up to 10,000 celestial objects at a go.

Users love the performance of this telescope thanks to the wide aperture and the ease of setup. The price is also reasonable for the quality of this unit.

You can buy the Celestron 22065 Astro Master 102AZ on Amazon. This is one of many online stores where Celestron sells their products. You can purchase the telescope on Celestron’s website and other specialty online stores.

Compared to other scopes on the market, the price is great. The Celestron 22065 Astro Master 102AZ telescope sells for less than $200. 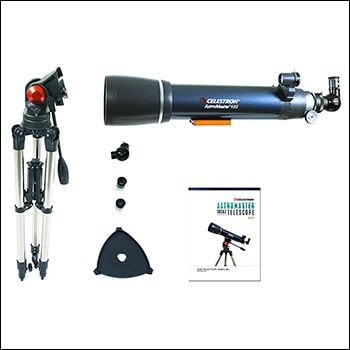 While this telescope is relatively large and heavy, it remains a portable model, allowing you to use it outdoors. When fully extended, the optical tube is about 36 inches. It weighs 20 pounds, therefore, you can carry it on your shooting excursions or hunting expeditions to locate targets and wildlife.

You are offered two eyepieces; 20mm and 10mm eyepiece. This gives you adjustability; you can watch near and distant objects. A Red Dot Finderscope is also offered to allow you to track objects with great ease.

Images on the telescope will not only be bright and clear, but will also be upright. This is made possible by the Image Erect Star Diagonal, which corrects images horizontally and vertically. On the package, you are offered focus knobs with ridges and enough resistance, allowing you to focus with ease.

Even as a beginner, the alt-azimuth mount will enhance your focusing skills. The mount features a panning handle/altitude clutch to allow you to tilt the telescope whichever way you need. Lastly, you are offered Astronomy Suite software to better your observation.

The Celestron 22065 Astro Master 102AZ comes as a complete set to allow you to start viewing immediately. It runs on one Li-Ion battery, which is included in the package. According to users, the telescope design allows you great control thanks to features like the mount tension knob, panning handle, and tripod leg clamp among others.

This telescope is not any different from other telescopes. Ergo, cleaning it will mean blowing dust from the lenses and the eyepieces, wiping dirt and smudge from the lenses with a lens cloth or camel brush. Keep the scope in dust and moisture free area.

You are offered all accessories needed including:

Even with these accessories, a Barlow lens, which would help double or treble the magnification of the telescope significantly, is missing.

You are offered a 24-month manufacturer warranty to cover you against design defects. Like many other products, you can return telescopes that do not perform as the manufacturer claims.

The Celestron 22065 Astro Master 102AZ comes as one of the most powerful telescopes in the AstroMaster series based on the clarity of the images it produces. Even with its high magnification, you can still upgrade it with better eyepieces. It, however, misses a carrying or storage case to house components. Granted, you will find it relatively challenging to store it; but you can buy a case.

This telescope can be used by beginners and can also be used by experienced star gazers and hobbyists who need to enjoy a good site.

What’s your take on the Celestron 22065 Astro Master 102AZ Telescope?