Humanity has a long history of gazing longingly at the stars above them and wondering what was up there. We’ve gone from using our own eyes to see to advanced equipment through the ages that allowed us to get a glimpse into that world.

Now we have the luxury of being able to get an idea of how magnificent our galaxy is from wherever we choose provided we have the right equipment for the job. Enter the Celestron AVX computerized mounting system, the best way to hold and direct your telescope where it’s needed the most.

In this article, we’ll go over the Celestron AVX’s specs and features as well as what sets it apart from the competition. You’ll get insight as to why this mount is favorite among the astro-imaging crowds and in the end, you’ll be able to decide if this mount is everything you’re looking for.

What Is The Celestron AVX And How Does It Work? 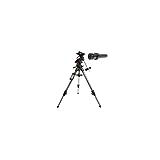 The Celestron AVX is an advanced, computerized mount made to hold advanced telescopes for astro-imaging in mind. This mount works great for beginners and intermediate observers alike, all the information you need to be provided in an easy to follow pamphlet.

When you order your Celestron AVX, you’ll get quite a bit for your purchase. In the box, you’ll receive items such as: 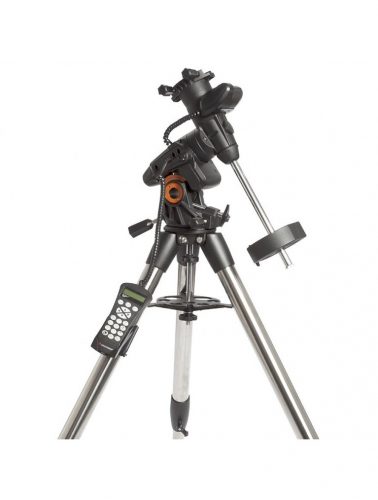 The mount itself is superb for astronomy observation with smaller telescopes, and it’s maximum weight capacity maxing out at 30 pounds, it was designed to provide cost-effective performance for imaging. Its features can compare with Celestron’s larger telescope mounts. These features include:

You’ll be able to access these advanced features for far less than what you’d expect to pay. The mount and the tripod together only weigh about 50 pounds. It’s not the lightest thing to carry around everywhere, but it’s far lighter than most other models on the market.

The mount itself has a dual-axis tracking, low-cog DC servo motors that have positioning encoders that provide an improved tracking performance. These motors are also designed to handle an unbalanced load better than the previously advanced series drives thanks to the increased power to the motors to control it.

These motors have a built-in backlash compensation which, used alongside the permanent periodic error correction settings, allows the motors to make precise corrections during use and when you’re observing at high powers.

This mount provides nine slewing speeds, the fastest setting set at four degrees per second through the mount itself can go between seven degrees and 77 degrees in latitude range without burning out the motor. Each tracking rate includes settings for solar, lunar, and sidereal.

This mount also has a vixen-styled dovetail slot for optical tubes that also have the appropriate styled plate. A large knob that you can hand-tighten will secure the optical tube in place while a second knob will prevent the tube from sliding off the mount.

The tripod is just as robust as the mount that’s attached. The legs are easily two inches in diameter and can be extended out from 44 inches to 64 inches before being secured in place by a center leg brace. The leg brace itself can double as an accessory tray that can hold a one and a quarter inch and two-inch eyepiece to prevent them from getting damaged on the ground.

You’ll also have a holder attachment that you can remove or attach if you don’t want to hold the NexStar+ computer hand controller but don’t want it to get damaged. The scope included has a car battery cord that’s operated from a cigarette lighter plug in a car, or you can use a rechargeable 12-volt battery pack.

Since the mount needs a twelve-volt power source, it would be a good idea to invest in a separate power tank for extended use. You can purchase Celestron’s 17 amp an hour capacity power tank if you so choose, but you won’t have limits on your choices.

If you do choose to go with Celestron’s power tank, you can charge it hundreds of times without fail and has been tested to operate the scope all night without concern of running out of power. The AC adapter by Celestron is capable of performing the scope from household AC if you’re lucky enough to view the sky from your backyard.

You’ll have a 12-pound counterweight and counterweight bar which is easily locked in place with a hand-tightened thumbscrew. Celestron provides additional counterweights which are available for purchase from their website and can make it easy to rebalance your scope if you have heavy accessories added on.

The NexStar+ computerized hand controller operate all of this. It can have programmed language settings up to five different languages such as:

The NexStar+ has over 40,000 entries for stars and deep space objects such as Messier, IC, Caldwell, selected SAO stars and Abell Catalogs. You’ll also have access to planets, the moon, plus much more. You’ll have access to enhanced information on over 200 different note-worthy objects which makes learning what’s out there so much more fun.

You’re able to store and edit the ascension and declination of an additional 100 user-defined objects that you choose. This is helpful when a comet or an asteroid’s coordinates which you can find in a magazine known as Astronomy and Sky & Telescope with a monthly subscription.

All of your information from your database and telescope operation displayed on a double line on a liquid crystal display. The buttons are easy to see at night thanks to LED backlight on each one, and the light won’t hurt your eyes if once adjusted to the surrounding darkness.

The controller has two AUX ports which function the auto guider and an RS-232 communication port that gives you control of your telescope through a personal computer. The hand control software that can be upgraded from Celestron’s website so you’ll always have the most current version of that software.

The NexStar+ contains many different pre-programmed alignment methods that allow you to choose computer-accurate locations immediately. You’ll have the option to choose between:

Each mode only takes a couple of minutes to properly align itself which makes getting to stargaze easy and fast. Some people claimed they were able to get their telescope assembled and aligned in as little as 15 minutes once they staked their spot.

If you purchase a SkySync GPS module which is usually inexpensive, your NexStar+ can be fully GPS compatible. The addition of the GPS to the computer is unique to this model and because of how easy it is to orient the scope in time and space on earth while aligning the scope towards the sky will be as simple as turning it on.

What Makes The Celestron AVX Unique?

​Celestron improved many features on this model to let it stand out. First off, the build is more robust than models like the CG5. The adjustment screws have been fashioned to hold the optical tube in place much more securely than other models.

The GPS compatibility in the NexStar+ is unique to this product, and it is the cheapest mount model of its weight class.

The current market price for the Celestron AVX mount is sitting at $$. For its weight class, it currently sits as the cheapest mounting model that is on the market. While you already get a large assortment of features included with your purchase, there are more accessories you can purchase to enhance your experiences further.

A spare ​AC Adapter that runs about five amps currently priced at $65.00 This adapter helps connect your computerized mounts to an AC outlet when they become available. Following that would be the PowerTank power supply that runs the same price and provides power when other forms of electricity aren’t available.

You’re able also to purchase Vibration Suppression Pads which fit under your tripod legs that help stabilize it while preventing unwanted shaking. The reason that these do such a good job is that the materials that make these pads are called Sorbothane which is a  synthetic viscoelastic urethane polymer that offers supreme shock absorption.

They work on any surface and currently cost around $53.95.

As mentioned previously, you can buy additional eleven-pound counterweights for $63.95 each as well as a Polar finderscope that works with not only the AVX but also the CG-5 and the CGEM for only $53.95.

With the Skyportal WiFi module attachment, you’ll be able to take your viewing experience to another level. This module allows you to connect wirelessly using your smartphone or tablet and supported on Android and iOS. You’ll be able to center on any celestial body in the sky by just tapping on it, and your mount does the rest.

You’ll be able to listen to over hundreds over audio descriptions from your device which give you a detailed account over the most famous celestial bodies, including history, mythos, and features of that selected area of space. You’ll have the option to check out a function known as Tonight’s Best to view events that you will see that evening.

Many consumers are wary of trying out a newer mount model, especially when they are loyal to a previous incarnation like the Celestron CGEM 2 mount and tripod. The first place where the AVX takes the lead is the price tag. The AVX sits at $$ while the CGEM 2 is currently $$$. That’s a $$$ difference right there. 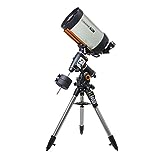 The CGEM 2 is capable of handling up to ten pounds more than the AVX, and its counterweight is more substantial at 17 pounds. Alongside holding more massive tubes with relative ease, the CGEM 2 also comes compatible with Vixen and Losmandy dual dovetail which makes that mount more accessible for a more extensive range of plate uses.

The AVX only handles the standard dovetail mounting. You’ll find the CGEM 2 is much more substantial than the AVX. The CGEM weighs about 77 pounds which may provide a struggle for individuals who want and need to tote these mounts about. The AVX only weighs approximately 50 pounds in total and makes it much easier to take around on night trips.

The tripod and stabilizing tray are the same, as are many of the features that come with the NexStar+. However, the CGEM 2 is only capable of handling a latitude range of 15 degrees to 70 degrees, while the AVX goes between 7 degrees and 77 degrees. Both are very easy to operate and provide detailed instructions on how to do different things.

The Celestron AVX is an appropriate mount for beginners and people who are looking for a lot of features while being on a budget. The functions provided with just the standard purchase alone are more than enough to validate the price tag, and you have a long list of options as far as customization is concerned.

As long as you respect the weight limits that this mount has, as well as attach the proper counterweights, consumers had claimed that the motor lasted a long time if it’s well cared for.

That said, if you desire a more large tube and you need more accessories to enhance your viewing experience, then the CGEM 2 may be more appropriate however we feel that the AVX is more than adequate to take on any needs you may have while stargazing.